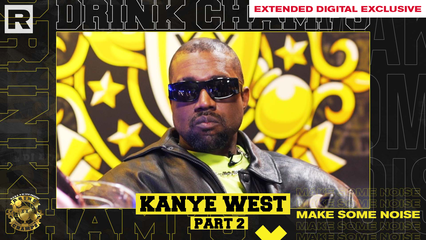 Last night (Nov. 11), viewers were able to tune in to the second part of Kanye West’s fiery “Drinks Champs” interview, where he discussed mental health, Dave Chappelle’s controversy, the campaign to free Larry Hoover (with the aid of Larry Hoover Jr.), and much more. Those that watched the first part of Ye’s sit-down with N.O.R.E. and DJ EFN in its entirety will recall some scathing comments that the G.O.O.D. Music head honcho made towards past collaborator Talib Kweli, whom he became estranged with following his highly-publicized alliance with disgraced former president Donald Trump:

“Kweli be gettin’ up, and like, ‘come back home.’ Home where, nigga? … That’s my issue, man, and all these backhand—’oh yea, you know, Ye, he’s a billionaire, but fuck him being a billionaire … he not like Dave Chappelle, he not like down with the people, he not…’ If I’d be like you, Kweli, I’d be where you at. Now if you take the average, 99 percent of people, say, ‘do you wanna be Kweli, or do you wanna be Ye, mo’ people gon’ wanna be Ye, Kweli!”

Last night, he continued to take shots at the Black Star alum by doubling down on his dislike of his music and — after a reminder from N.O.R.E. — coming to the realization that he recently crossed paths with Kweli, much in the same way that he did with Big Sean:

“I apologize, once again, to Kweli, I’m sorry I never fucked with your raps (laughs) … Oh shit, I did just see that nigga! I totally forgot! Oh … I’m really gonna have to fight this man. It’s gonna be 12 niggas with fitted caps from 12 years ago chasing me.”

He also made a statement about posing “as a backpacker,” telling the room that he was only “using” that particular group, presumably during his earlier years in music.

Check our part two of Kanye West’s “Drink Champs” interview above. The moment (or moments) in question happen a little after 50 minutes in.