While also speaking about the 2020 protests that erupted in her home city of Atlanta, Lance-Bottoms said, “In that moment, I probably learned more about leadership than any other time in my life.” 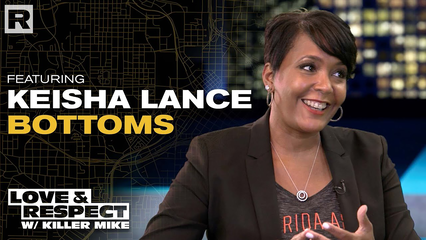 When was the last time you were able to find straight-talking, inventive, engaging, and culturally adept entertainment that made you want to come back for more? Well, this is your lucky week! REVOLT has officially premiered “Love & Respect with Killer Mike.” In this weekly interview series, presented by Cadillac, Grammy-award-winning rap artist and activist Michael “Killer Mike” Render sits down with a variety of public figures to talk about everything from politics to popular culture.

The show’s first guest was none other than Atlanta Mayor Keisha Lance-Bottoms. The well-respected politician reflected on her decision to not run for re-election, and even shared that she didn’t have any one reason about her choice. But, like many, she spent the last two years re-evaluating her life and thought about how she wanted to spend her next days.

Render and Lance-Bottoms also discussed pivotal moments during her tenure as the mayor of the ninth-largest metropolitan area in the United States, including the protests and riots of last summer. The two — along with Atlanta-based rap artist Clifford T.I” Harris — spoke at an emergency press conference condemning the actions of people causing damage to the city. On the show, Lance-Bottoms shared, “In that moment, I probably learned more about leadership than any other time in my life.”

The pair also discussed development in Atlanta, the storied history of traditionally Black neighborhoods such as Collier Heights, and even the city losing the 2021 MLB All-Star game. This no-holds-barred conversation was less of a traditional interview, and more of an honest and insightful discussion between two friends. Keisha Lance-Bottoms even detailed her upbringing as the daughter of a hairdresser and R&B/soul singer Major Lance. One thing about the show that was much appreciated was how in-depth the interview went into the history of Atlanta and how politics influences our everyday lives.

“Love & Respect with Killer Mike” airs every Monday on the REVOLT channel at 9:30 p.m. ET, and its YouTube and news site on Wednesdays at 5:00 p.m. ET. Each episode will have an eclectic mix of guests that include politicians, performers, and anybody who can bring interesting and thought-provoking conversation to the table.

Watch the premiere episode above!