On the newest episode of REVOLT’s “Off Top,” Big Tigger, Rapsody, and DJ Nyla Simone sat down with Erica Banks. 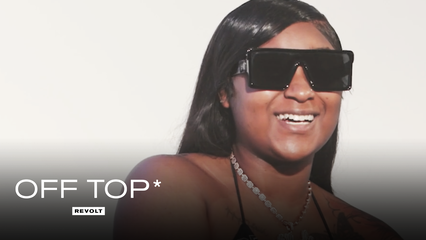 Erica Banks on the "Buss It" Challenge, TikTok, What's Next, & More (clip)

On the newest episode of REVOLT’s “Off Top,” Big Tigger, Rapsody, and DJ Nyla Simone sat down with Erica Banks to discuss her Texas upbringing, collaborating with DreamDoll, and growing beyond the success of her 2020 tracks like “Buss It” and more.

Banks’ dominated the TikTok community in the first quarter of the year with “Buss It” soundtracking the viral namesake challenge, #BussItChallenge, which featured users showing off their best looks and knee stamina for twerking. Aside from accounting for over four billion videos on the platform, the impact of the song also marked a milestone in the emcee’s career as her first career entry on the Billboard Hot 100 chart and first gold-certified record.

Despite finding major success with the track, Banks said she initially didn’t like the song enough to put it out. “I don’t be making music to make a hit. I make music based off of how I feel, and if this is a hit then it’s a hit. Like with ‘Buss It,’ it was just something fun to do. But like I said, I didn’t like it so I wasn’t gonna put it out. But my producers and family and friends were like, ‘No, this is hard. You should put it out.’ I’m like, ‘Cool, whatever,’” she revealed. “And then it did what it did.”

The “Trip Out” emcee further explained that she did not want her versatility to be placed in a box after “Buss It.” She continued: “Whenever producers send me beats, they always send me like club beats right. They don’t send me the R&B, they don’t send me the Caribbean… and I can pretty much do everything. I have a song for every genre as far as what’s in the vault. But, I always want people to know that I’m not just the club girl.”

Rapsody noted that Banks was an avid poet in middle school before she decided to pursue her rap career. The Dallas rapper confessed that she developed a love for writing at a young age. “My favorite subject was always language arts or writing. I love telling stories. I love writing love story books. So, it actually came from that. And then I thought, ‘Well, it’s kind of cool that I can rhyme these words,’ you know, and then it turned into me loving poetry, and then it kind of just transpired to music.” Rapsody followed up asking if fans would get to see the rapper’s poetic side, to which she responded, “You know what? I’m not gonna say no… Scripts sounds like some money.”

Considering her interest in scriptwriting, Banks said she would write a movie about her life and her accomplishments, including getting a gold record in six months. Tigger asked what would be her crowning achievement if she wrote a movie about herself 10 years from now. “Plenty [of] platinum records by then. Plenty [of] businesses of mine… different facilities because I want to do stuff outside of music too, but you gotta make the money first,” she explained. “So once I make the money, it’s a lot of stuff I want to do, but I definitely want to be a legend in 10 years like Nicki Minaj almost.” Among her dream entrepreneurial ventures is selling press-on nails that are personalized to her length preference and owning a nail salon called Compliments, which she looks forward to bringing to fruition by next year.

Growing up in Dallas, Texas, Banks grew up on the state’s well-respected rap legends and DJ scene. Banks spotlighted BeatKing, Lil Ronnie, and DJ Papa Ron as a few of the artists that she looked up to for inspiration. “I love Texas and just seeing the music scene grow from what it used to be has just been inspiring,” Banks added. Following up, Simone asked who are some of her favorite breakthrough artists and she named Coi Leray, Lakeyah, Flo Milli, and Toosii. Touching on her artistry, Rapsody asked Banks if she ever felt censored on her subject matter as a female rapper. However, the “Give Me That” rapper says she’s never felt the pressure to be silenced, especially growing up as a middle child in her household. “That’s just me being the person I am. I’ma always say how I feel, you know, regardless of what it is or how it is said or whatever. I don’t ever want to make people think that I’m one that you can make uncomfortable ‘cause who’s gonna beat me up?”

Joking that the Dallas native is an MMA artist, Tigger asked what are some things that people may not know about her. Rapsody also chimed in asking her how many fights she’s ever been in. She laughed, responding, “I think I’ve only been in three my whole entire life. There was one in third grade —it was a boy. It was one in seventh grade — it was my best friend who I’m still friends with. And then in 10th grade — it with this fat girl.” According to her stats, she is 2-0 in her fights.

Rapsody asked her relationship status and whether or not having a relationship is a major priority to her. With a blossoming career ahead, Banks said that she is simply “having a good time” at this point in her life. Tigger asked both Banks and Rapsody if they had any concerns about their perceptions of dating as female rappers. While Rapsody admitted she doesn’t prefer to have people in her personal business, Banks added she would be cautious with the way she carries her relationships publicly. “I would definitely be concerned, just because like you said, rappers can pretty much do whatever and it’s cool. And you know certain situations be kind of messed up out in the public eye, so I would just be careful in that kind of situation,” Banks admitted while also noting that she would prefer to date a singer over a rapper.

Erica Banks is focused solely on her music at this point in her life. On the topic of her forthcoming project, Banks teased new sounds to come. “I do have a couple of Caribbean/reggae vibe records that I’m looking to put on the project, but it’s a lot of different vibes — there’s rap, club, slowed down, storyteller,” she said. Her main goal in her career is to maintain longevity. She told the hosts, “To have value as an artist and have people value my music and the quality of it. I don’t want people to just value the song or the tempo. I want them to appreciate the value of it because my music is one of a kind…”