Taking on the role of a plumber, Druski managed to get into the rapper’s home with a fake mustache, super cheap plunger and a toolbox full of snacks. 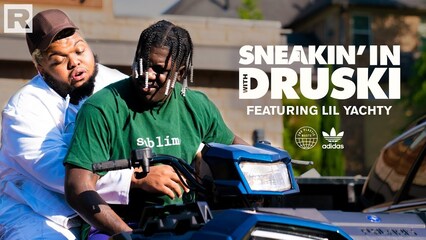 REVOLT is back again with another episode of “Sneakin’ In With Druski” where he’s bringing sustainability to hip hop one trespassing violation at a time. In partnership with adidas Originals, Diddy enlisted Druski to sneak into your favorite hip hop artists’ homes to show them a new way of living. This week, the target was none other than Lil’ Yachty.

Taking on the role of a plumber, Dru managed to get into the rapper’s home with a fake mustache, super cheap plunger and a toolbox full of snacks. While being escorted to the bathroom, he insisted he had to check the pipes in the kitchen to make sure they were perpendicular and working smoothly. After a few minutes of foolery, Dru grabbed a snack from his toolbox and took a look around, finding the best alternative to chewing gum — the plastic free kind of gum — and a candy corner. Amongst the sweets, the host also found a container of plastic straws, which he replaced with reusable metal straws as his first success of the day, as plastic straws can cause extreme harm to our oceans.

Finally, after Dru turned on a record, Yachty appeared to see what all the commotion was about. Not with the antics, the artist snatches off his mustache in an effort to figure out what is he doing, why is he was there and why are there cameras? One funny moment after the next, Dru finally tells him Diddy is the reason for his disturbance.

After noticing a few plastic bottles on the counter, Dru mentioned the importance of recycling in order to save the planet. The rapper then showed the host the inside of the fridge where he kept a ton of non-plastic, 100 percent recyclable water bottles, proving he is already doing his part. In true Dru fashion, he grabbed a water bottle without permission and with some confusion on our homeowner’s end, the guys moved on, checking out Yachty’s $20,000 piano and sneaker closet, which he calls his heaven.

While there, the two looked over all of Yachty’s kicks in awe. Funny man Dru soon notices the many pairs of Yeezys and offers a fair trade: One pair of Yeezys for a pair of adidas Stan Smiths sneakers. Afterward, Yachty figured he’d get the shoes anyway so the comedian hit him with, “Maybe you can just give me some free Yeezys, that’s where I’m at with it at this point.”

From there, the two walk out of the closet with gifts literally coming out his behind. They head towards the bathroom to take a look at the sauna and hi-tech toilet. Dru decided that was the best time to offer up two recyclable toothbrushes, disgustingly unwrapped and from his dirty uniform’s back pocket. Confused and displeased, Yachty accepts the gifts as plastic toothbrushes cannot be recycled and aren’t safe for Mother Earth.

Before the show ends, a message from Stan Smith arrives encouraging everyone to join adidas Originals, Diddy and hip hop in the fight for a more sustainable planet. With four artists down and more to come, keep watching “Sneakin’ In With Druski” only on REVOLT.