Karlous Miller says Black people have the power to do more about social justice, but don’t

DJ Scream and Big Bank return with another blazing episode of the “Big Facts” podcast with funny man Karlous Miller. 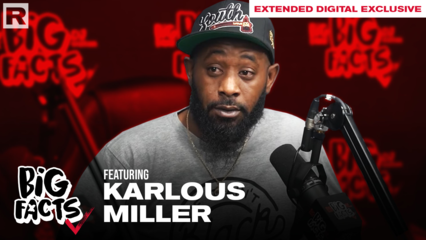 DJ Scream and Big Bank return with another blazing episode of the “Big Facts” podcast with funny man Karlous Miller. The OG “Wild ‘N Out” star joined the crew for an interesting conversation regarding relationships and how long is too long to wait for your partner to “get it together.”

According to the 85 South member, if his partner didn’t have their affairs in order — career, goals, etc. — when he met them, he’s in no position to change that. “You gotta stop changing to fuck with people,” the media personality explained. “If you meet a motherfucker and they got three niggas, and you number four, don’t try and jump in the number one spot because you don’t know what type of pressure is in that number one spot. Stay number four forever.”

He continued, “That’s where we be fucking up at, think about it. Everybody that you don’t fuck with no more, it’s because you got to know their ass. If shit would’ve stayed a mystery, you would’ve fucked with them [for] a hundred years.”

Following his impromptu relationship advice, the comedian stuck by to give his view on several other issues like what activities he feels should be legal, police brutality, and more.

If Karlous had his way, there’s a couple of things he’d make legal — prostitution being one of them. “They need to legalize medical prostitution to cure depression and shit,” the comedian quipped. “I feel like prostitution should be legal. It needs to be legal [all over] the world… you can’t tax it… That would mean more income for women — bridge the wealth equality [sic]. You can’t tax her body. That’s her business… she owns the building. It’s actually a tax deduction.”

Karlous also believes you should be able to use the same amount of force that someone uses on you regardless of occupation — excluding women. The comedian seemingly alluded to treating law enforcement with the same force they implement on people they apprehend.

Police have had a long-standing history of using excessive force when it comes to how they detain Black and brown people. However, in recent years, more awareness has been brought to these issues, thanks, in part, to cell phone footage that have caught said harsh treatment in real-time.

Karlous believes that when in these situations, you should reciprocate any abusive conduct bestowed upon you. “Don’t hit these women first and foremost. It’s too must shit going on with that,” he explained. “But what I’m saying, we men, we’ll just leave the women out of this. If a man puts his fucking hands on you, no matter where he work at, you should be able to hit their ass back. You should be able to handle a motherfucker the same way they handle you.”

When warned that a situation like that wouldn’t end well for said person, Karlous fired back, stating, “Look how it’s ending now.” He also believes Black people should able to request a Black officer when dealing with authorities. “[If] you can sit here and wait on the dope dog, I’ll sit here and wait ‘til some Black officers get here and handle me,” he said. The personality seemingly wants to see reform in the sense of who dispatchers send to handle certain instances — a practice that’s been widely suggested, especially in cases of a mental health crisis.

Unfortunately, the star believes the tension between citizens and police officers will get worse before getting better. “By the time that shit change, everybody gone be shot up,” he expressed. When asked for clarification, Karlous said, “It’s too slow. It ain’t too late, but it’s taking too long. Look how fast them Asian people got their shit changed. It’s been three weeks. Nigga, this shit been going for 178 years at the point. You mean to tell me, they (the Asian community) can come in and get they shit done in three weeks?”

The How High 2 actor was referring to the legislation passed in April 2021 targeting anti-Asian hate crimes following the uptick of incidents during the COVID-19 pandemic. The legislation was introduced by Senator Mazi Hirono, D-Hawaii, in March 2021. It would direct the Department of Justice to expedite the review of hate crimes related to COVID-19 reported to law enforcement agencies and help them establish ways to report such incidents online and perform public outreach, NBC News reports.

As far as finding a solution to the social injustice faced by Black people, Karlous feels like, as a community, enough isn’t being done. “Man, we can sit here and make anything in the world go viral… at any moment, as we want to as a Black culture. We can make the hottest dance, the coldest clothes, just by saying we fuck with it,” he explained. “You don’t think that shit will work if we tell them what we not fucking with? We playing, bruh. Niggas still wearing Gucci around this motherfucker. We don’t have no principles. We ain’t never made not one decision that we all stood on.”

He continued: “We could sit here and talk all the positive change in the world that we want to; the whole community be ready. The media gone find the two niggas that disagree with the shit to discredit everything that we just said. I don’t know what the fuck got to happen before we as a community stand up and say, ‘This shit is wrong.’ These motherfuckers snatching grandmas out their cars, shooting kids up. Who they got to shot for us to be like, ‘This shit is wrong’? How much more of this shit you got to see? You really got to see the bullets in the motherfucker with his brains hanging out to say this too much? It ain’t got graphic enough yet? These niggas laugh at the shit that happens to us. They make TV shows and movies about this shit. They tell our stories from their perspectives.”

Karlous feels education is crucial, and encourages folks to go out and seek knowledge. “They think we really live in stereotype. They don’t understand we have the capabilities to multitask,” he said. “I could be sad about George Floyd and look at these hoes at the same time to make me feel better.”