City Girls reveal how they’ll handle finding out their man has a small piece: “Ima cheat”

City Girls also expressed why broke men don’t deserve p**sy. “They mad they s**t ain’t going the way it’s supposed go…I don’t want no n**ga who ain’t got no money and a muthaf**kin’ attitude f**kin’ on me putting them negative a** spirits in my life,” JT said. 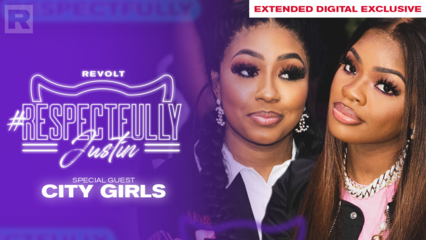 Miami’s own City Girls showed up and showed out on a new episode of “Respectfully Justin.” The rappers opened up about their current and past relationships while defining what it takes to be a “city girl” and spot broke men. “To be a city girl, you got to be on your s**t because a lot of b**ches think that being a city girl is a s**t, bomb a** b**ch who just out here f**kin’, who can’t find no n**ga to love them,” said JT. “You got to find you a n**ga who gone treat you right, spend they bread, treat you like a queen and you still getting yo bag too. Now, that’s city girl s**t, not getting drugged out at home by yo broke a** muthaf**kin’ men.”

The conversation of broke men acting rich is no secret when it comes to social media. On multiple occasions, men have been exposed for flaunting fake money and jewelry to fool women into believe they really got a bag. However, Yung Miami expressed how hard it is nowadays to separate the real from the cappers, while JT added that women will only know if a man is broke until you live with him. “Honestly, if you just see a n**ga from day-to-day and these n**gas be jet pooling, they be on other n**gas checks, they be taking pictures in other n**ga’s s**t. So, you really don’t know who s**t what, when, and where. So, a lot y’all won’t know if these n**gas really broke if you’re seeing them on a day-to-day basis,” Miami said.

The rap duo didn’t hold back when talking about their boos Southside and Lil Uzi Vert dropping bags on them. Miami spoke about what a first date with her costs. She expressed that most men send jets when they want to see you, but her baby daddy Southside paid $50,000 on furniture for her townhouse. Her response left Justin LaBoy speechless, so he swift the question over to JT. But, she couldn’t keep herself from smiling at her man Uzi who was watching from a far. “When I first met my man, I was still in the halfway house, so he came to see me. He came to Atlanta and he had a bag full of money. I had a little Chanel bag, and he was like take as much as you can. I could only fit $30,000 in there and I was so mad,” she gushed. “Then, he took me to Louis Vuitton and Taco Bell. We had to make it quick because I had to be back to the halfway house.”

As LaBoy introduced the “Demon Time” segment he asked Miami what she would do if she reached the sex stage with a man only to find out that he’s carrying a small package. “Ima cheat,” she said quickly while laughing contagiously. Although, a man could be giving her a luxury lifestyle, the rapper isn’t a fan of him having a baby cucumber too much. City Girls’ song “Broke N**gas” raised the host’s eyebrow and made him question why they believed that. “Broke n**gas got the best d**k,” Miami chuckled. “Like yo d**k too good, stay away from me. Like go, you need some money. One thing for sure, I was young and I had some broke n**gas before.” JT chimed in and expressed that broke men are “always mad anyway.” “They mad at life. They mad they s**t ain’t going the way it’s supposed go. They always got an attitude, so I don’t want no n**ga who ain’t got no money and a muthaf**kin’ attitude f**kin’ on me putting them negative a** spirits in my life,” she added.

The show continued with the host switching gears to discuss women sleeping with men on the first night. “You gotta f**k for yo life,” JT joked. “That’s an interview. You better do yo best because you never know if you gone see that n**ga again, baby. You better for what you know. So, you better f**k for yo life, so the next time when he walks off, he’ll be like, ‘Damn, she got some good p**sy.’ But, if you know yo p**sy ain’t hitting on nothing don’t go in f**kin on the first night, let a n**ga get to know you,” she said. LaBoy reiterated the subject of women knowing when their box isn’t pleasurable. “I feel like you know,” Miami debated. “‘Cause yo n**ga always cheating.” JT added that it has a lot to do with men. “Sometimes yo p**sy ain’t garbage, sometimes he’s garbage and sometimes it doesn’t get wet like it’s suppose to.”

Watch the City Girls episode of “Respectfully Justin” above for more!