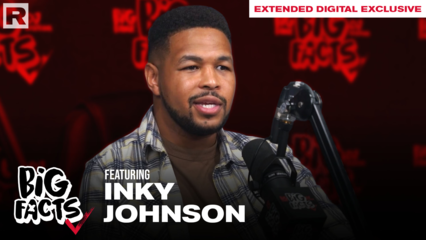 The “Big Facts” podcast with DJ Scream and Big Bank returned with an extra special episode — call it a pick me up, so to speak. The group was joined by football player turned motivational speaker Inquoris Desmond Chade Johnson better known as Inky Johnson.

For the 35-year-old growing up in Kirkwood, Georgia; life wasn’t easy. Johnson was the child of a teenage mother living in a “two-bedroom home with 14 people,” he explained. Early on, he saw sports as an outlet to help support his family.

“I felt like they were good people,” Johnson expressed. “I saw it all like any other cat coming up in the city. You see, and you want to make a difference in your family’s life, and you feel as if you’ve been blessed with the talent to do it, and so football was my game.”

Johnson later became the first person in his family to go to college. In his pursuit to make good on his family’s investment in him, the burgeoning football star earned a scholarship to the University of Tennessee. However, during a game, while attempting a play that Johnson said he had executed time and time again, things took an almost deadly turn.

“My junior year, make a routine tackle that I’d been doing since I was a kid, [I] found myself in the emergency room fighting for my life two hours later,” he explained. “And it paralyzed my right arm and my hand; raptured an artery in my chest. Tore the nerve from my spine that controlled my arm, my hand, my fingers and obviously ended my career.”

Johnson expressed that he never would’ve imaged a career in speaking as he never had an interest in speaking publicly. However, after sharing his life story with an individual, he revealed that he subsequently found his calling in life and has been doing it for the last 14 years.

When Johnson was asked how he has maintained his momentum even in the eyes of adversity, the former athlete explained that he “never had the luxury” to give up. “When you grow up how we grew up, if I give up, I’m going back to the porch,” he said. “I just couldn’t fathom me getting to that point of college — like a lot of people helped me. That’s why I live my life the way that I live it… Like a lot of cats (people/family) help me, so I couldn’t see me getting an injury, and quitting, and going back home to Kirkwood, and saying ‘Aight, good ride. I made it to that point, now come back to the hood.’ Naw, I gotta make good on this promise and show ‘em what I’m made out of. I can’t quit… I’m not built like that.”

Still, he admitted that processing the unfortunate events that took place was a two-year struggle. Johnson soon found himself going to sleep early with hopes that he’d wake up and his injuries would have all just been a figment of his imagination. He even found himself apologizing to family members for seemingly not keeping his “promise.” Still, they wouldn’t allow him to accept blame as long as he promised to continue being a “decent” human being.

Johnson continued to prove that he wasn’t a quitter. After unsuccessfully trying to get a job as a youth football coach, the entrepreneur devised a plan to hand television talk show host Oprah Winfrey his book. However, saying the task was far from easy would be an understatement.

And with the help of a friend and $200 to his name, Johnson managed to get to the media mogul’s studio during the time where her series was nearing its end. After ineffectively trying to get past security, the author said he took a seat on a nearby curb and sparked up a casual conversation with a houseless person he had met. Moments later, Johnson looked up to see Winfrey with her security guard walking down the sidewalk.

“I get up, and I’m like, ‘Man, I’m finna take my shot.’ I’m thinking my man gonna come up and move me out the way,” he explained. “I start walking towards her, and she walking towards me. She gets right in front of me. I say, ‘Hey, I’m Inky Johnson. I drove up from Atlanta, and I just wanted to give you my book.’”

Johnson detailed how Winfrey was playfully shaking his suit jacket he had been wearing — complimenting him — before handing his book off to her bodyguard. The former athlete later revealed that her guard pulled him off to the side after closing the door behind Winfrey and disclosed that his interaction with the talk show host was a rare occasion. The guard explained that while he couldn’t promise the budding businessman that anything would come of their exchange, he just wanted to inform him that “what just happened, never happens.”

Johnson explained he didn’t care whether he would be a part of Winfrey’s book club, but he just wanted to know that God “was still walking with me.” He added, “That’s all I needed to know. I was just trying to figure out if God was still with that kid that grew up in Kirkwood and made it to college, got eight games away from becoming a potential first-round draft pick, and then my life got shattered. And that was God showing me, naw bro, I gotchu. That moment wasn’t even about Oprah. It wasn’t about Chicago. That was a faith journey for me.”

Elsewhere, with the recent increase of hate crimes and racism in the nation and honestly, the world at large, Johnson said that he believed the root of it was “understanding and miscommunication.” “It’s hard for a cat, sometimes, if things are going well to look at the other side of the coin,” he added.

However, Johnson feels that “unconditional love” is the cure to society’s turmoil. “It’s showing people love. Regardless of the situation. Regardless of skin color. Regardless of what’s going on,” he explained. “Me getting into organizational sports, a white man paid for that. I didn’t know my man. My man ain’t see me play. He was coming down the street… he helped a bunch of cats. When my man helped me, my man never come back to my mom and say, ‘You owe me for putting Ink in sports.’”

Johnson added that he’s always “looking at things with the right perspective and constantly trying to balance it out” and also “having a level of grace and love for cats when they slip because we all do.”