On the second episode of “Sneakin’ in with Druski” Dru is back to being a hot mess in efforts to save the planet — and with the help of Snoop Dogg! 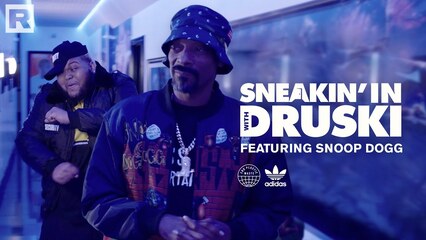 On the second episode of “Sneakin’ in with Druski” Dru is back to being a hot mess in efforts to save the planet. With every instance of trespassing, he drops a gem or two on how to make Earth sustainable and this one is no different.

Disguising himself as security in a pair of Stan Smith sneakers, Dru finds himself in Snoop Dogg’s home where he gets a grand tour from the rap legend himself. Starting off with our host relieving the real security of his duties, he notices the gum at the front desk — most of which are made with plastic content and are the second most littered item in the world behind cigarettes. After patting down Snoop’s security and handing him a pair of sneakers, the west coast icon pops up and Dru wins him over.

The first stop on the house tour is the basketball court where the two go toe-to-toe, though scoring almost nothing the entire game. After Dru injures his leg, Snoop offers him some water in a plastic bottle as he says, “Keep the planet safe.” Confused, our host calls him out as they move to the arcade to find a recycle bin, a key to truly saving the planet as the simple act can reduce 27 million tons of plastic waste.

The two crack tons of jokes as they move from one room to the next. Druski makes references to Snoop’s role in the film Baby Boy, as well as his singing abilities on his hit song “Sensual Seduction.” Moving on to the studio, Dru gets his first strike when he sits in the boss dogg’s chair, the only thing the rap legend told him not to do.

Nevertheless, Snoop introduces him with the homies and lets him know he’s surrounded by great entrepreneurs. Dru then tells everyone, “I know y’all here to go into business with me” — which they weren’t — “so at the end of the day if y’all wanna do anything, it gotta be recyclable.” Unimpressed, the room falls silent as Snoop blows smoke in the air. Two hours later, Dru wakes up from his second-hand kush coma and the guys head outside to check out the OG’s lowriders.

On the way out, the funnyman spots a lighter and lets the guys know matches are the way to go since lighters cannot be recycled. Clearly on Snoop’s nerves, Dru pushes forward singing “Gin and Juice” as they check out his old school whips. After spotting the rapper’s ladies mobile, which caused him to get way too hype for Snoop Dogg’s liking, especially after Dru grabbed his shoulder and barked at him, the comedian got the boot.

But, he still got the job done of converting one hip hop icon to a healthier and more sustainable lifestyle. Closing out, Stan Smith pops up with a message, and a pledge to do better for Mother Earth one change at a time with the help of the community.

Keep watching each week as adidas Originals and Druski continue to push for a more sustainable lifestyle with new episodes of “Sneakin’ In With Druski” only on REVOLT!