Growing up in a Mexican household in Santa Ana, California; DJ Carisma was introduced to the wonders of performing and entertainment by way of her parents. 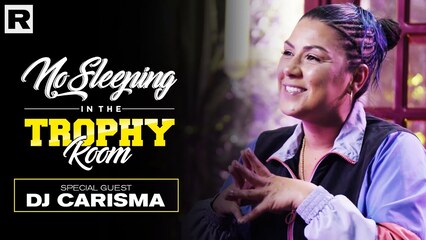 It’s no secret that a void lives within the world of music where female DJs and producers are concerned. But as is the case with most ecosystems tucked beneath a glass ceiling, there are noted trailblazers who have taken on the role of dismantling hurdles, leaving a clearer path for those that follow.

In the season two finale of “No Sleeping In the Trophy Room,” it’s DJ Carisma who puts the notion to the test as she sits down with Los Antonio to discuss the road that led to her reign as one of the industry’s most recognizable female DJs.

While varied in the details, one thing remains a common thread among guests of “No Sleeping In The Trophy Room.” It’s a humble foundation often anchored by tenets of hard work and tenacity instilled at an early age in an effort to curb less appealing fares. For Carisma, her origins were no different. Growing up in a Mexican household in Santa Ana, California, she was introduced to the wonders of performing and entertainment by way of her parents.

Per her recollection, the pair was an early example of what leaning into creative tendencies looked like. While her father boasted his talents as an instrumentalist, her mother’s creativity shined through her work as a hula dancer, the latter giving Carisma her first taste of work behind the boards as she hooked up her mother’s sound system whenever it was time to perform.

“They gave me that hustle mentality,” she says to host Los Antonio.

Armed with the backbone of hard work and supportive parents who challenged her to chase her ambitions with resolve, Carisma decided on a path that differed from her peers at the outset.

“ If I was a boy, I probably would have been in a gang,” she notes of the environment that surrounded her in Santa Ana. “…I used that as fuel.”

Early on, she found her way as a DJ, growing into the trade by way of church and family events in her community.

Early influences of the craft were the usual suspects with the likes of Spinderella and DJ Jazzy Jeff seated on Carisma’s personal Mount Rushmore. Pairing these influences with the brewing culture of hip hop in Los Angeles during the era made for the perfect breeding ground for the creative to take root.

But, it wouldn’t be long before she wanted something beyond California’s wealth of offerings.

A short stint in Minneapolis to pursue an education in radio broadcasting would eventually cement Carisma’s passion for DJing. At the time, she’d learn that radio broadcasting wasn’t quite her forté — a storyline that finds an updated plot twist with the DJ seated in a prime time broadcasting role at Power 106.

Her return to Los Angeles was marked with new resolve. Per Carisma’s memory, her hustle was characterized by the balance of multiple day jobs as a grocery store worker, sneaker store clerk, and weekend runs as a DJ. It was a test in her ability to actualize her desires and one she intended to pass.

“A lot of people have ideas,” she says, warning of the all-too-human tendency to rest in potential. “It’s a hard thing to execute and attack your goals.”

She paired this resolve with profound understanding of the power of hard work as she notes moments of catching Big Boi’s attention during her earlier days in radio.

“You never know who is watching you,” Carisma advises as she and Antonio relate on the trials and dedication associated with paying dues within the industry.

To this day, she hasn’t shaken the onlookers, riding her wave toward accolades that include being crowned as the best female DJ of the year three times.

Yet for all her success, Carisma, like others in her space, is still working toward opening roads for more female DJs, producers and other creatives in music.

Touching on the exclusion of female artists from larger categories at major awards show, Carisma echoed a common sentiment on the inaccuracy of superlatives like “best” when women are consistently left out of the running.

Naturally, she’s adopted a mission in challenging the status quo to make way for more diversity across the board.

The key to this end goal, however, consistently finds Carisma right back where she started.