On a new episode of “Respectfully Justin,” Boosie admitted that a woman on IG Live was asking him for money first. So, he tried to strike a deal with her. 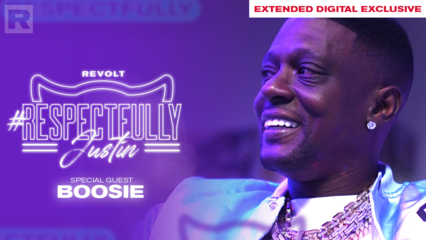 Our favorite toxic bros are back with a new episode of “Respectfully Justin.” Justin Laboy and Justin Combs caught up with Boosie Badass to discuss women, sex and more.

Laboy introduced the show by acknowledging the rapper beating his longtime battle with cancer and finally getting his account back on Instagram. Then, the questions began rolling out from the women in the audience asking Boosie about his sex life from eating ass to an encounter with a woman’s vagina being a little hot. “Yeah, I done ran across tart shit. Fifty percent of some pretty women, they be tart because I feel like some women, they focus on their face too much and not down there.” He elaborated that he does not go back to women whose hygiene is not up to part.

It is a known fact that men tend to buy the wrong condom size for their private area and women notice, as the rubber will slide off during sex, in addition to the lack of foreplay to keep their lady engaged with sexual intercourse. The Louisiana native express how he loves to be intimate with a woman before proceeding to represent the Scorpio zodiac sign. “I can have my pumps with women, so I like to be intimate with a woman when you know I’m with her. Because I’m used to getting quickies,” he said. With Boosie being an entertainer, it’s exceedingly rare that he shares his love for one woman. However, when he is with someone, he wants to give himself to only his lady of the hour.

From spitting in mouths to foot jobs, the unfiltered conversation between Boosie, Laboy, Combs and the women in the audience gets even more spicy when the rapper was asked if he has ever experienced running a train on a woman. “I know that you can flip yo way and make it seem like it’s fucked up, but like in the hood, that’s gangsta shit. Us bangin’ a bitch together. There’s nothing wrong with that in my eyes,” he admitted.

In the world of double standards and misogyny, women are always criticized for having multiple sex partners or seeing different men. While the male counterparts are often praised for doing the exact same thing, society refers to women as “hoes” or “sluts” for thinking they can act like the opposite gender. “If a woman compares herself to a man, regardless, her morals are fucked up,” said the 38-year-old. “She wasn’t raised right from the jump. You cannot compare Boosie to nobody because where I’m from, little boys don’t do the same thing as little girls. Ya mama raised you wrong if you felt like comparing yourself to me.” He added that women do not have the same advantage as him therefore there is no comparison.

Laboy continued with the topic of one specific woman, who Boosie shared thoughts on in the past, in regard to her being given a pass for her dating life. The rapper indicated that he didn’t want to discuss this due him being dragged on social media prior to appearing on the show. “A lot of people are mad at me and I was really trying to be respectful of all I can, but you know my words come out all fucked up. I didn’t mean anything by it, but I say what I mean, and I mean what I say,” he said. The “Set It Off” rapper implied that he doesn’t want to cuff a woman who’s been with a number of men. “I don’t want a car after it had atoll. I’m going to take it home and wash it the same. I’m not going to love it the same.” Boosie then clarified that he was not slandering anyone, nor does he have problem with what the young lady is doing because he still messes around with women like that.

In 2020, the rapper kept us entertained with his quarantine IG lives when his infamous quote “Put your pussy lips on live, I’ll give you a thousand dollars” began trending all over social media. Laboy wondered if Boosie has ever paid a woman for sex. “I was only saying that because somebody was asking for money on the live. I don’t pay for pussy. I haven’t paid for pussy. The last time I paid for it was in 2003 me and my lil nigga, we paid a bitch $300 for some pussy to train her, and that was the last time I paid for pussy — and I came quick.”

Before the show closed, the rapper shared the difference between his purge room and his freak room. “My purge room isn’t sexual — see they took that wrong. My freak room is sexual. I have purge room, so if the people come, I can hide behind concrete walls you can’t shot through them,” he said. “I got a TV in there you can’t get to me. But, the sexual room it’s just, I made it behind the walls like if you come in, you can’t see it. I have a pole. I have a dick riding chair.”

Watch episode three of “Respectfully Justin” for the rest above!