On the latest episode of “No Sleeping In The Trophy Room,” the southern California-bred creative breaks down his journey. 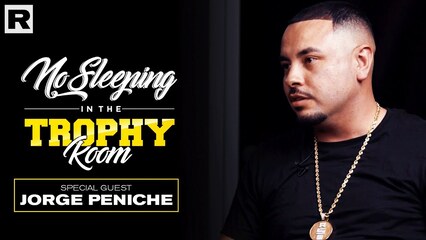 There’s a distinct level of tenacity present in the household of immigrants taking a stab at The American Dream. It’s one of great sacrifice to those who know it best and can serve as a catapult to great heights for those fortunate enough to grasp the lesson hidden within.

For photographer and graphic artist Jorge Peniche, learning this lesson was a no-brainer and in the latest episode of “No Sleeping In The Trophy Room,” the southern California-bred creative breaks down the journey that transpired as a result.

Immigrating with his family from Mexico City to Rosemead, California at the age of 2 was the first step, explains Peniche as he talks shop with host Los Antonio. Despite being surrounded by Mexican-American families in the working class town, he recalls a uniquely traditional Mexican upbringing in his home as opposed to his peers. It was one that kept his roots unwaveringly anchored.

The most impressionable aspect of his childhood, however, was the chance to watch his parents do whatever it took to care and provide for their family, as he recalls his father’s swift movement between business ventures to keep up a steady stream of income while his mother made a living selling silk flower arrangements year-round.

“I always marveled at the fact that they were able to make it happen,” says Peniche. “Their example alone of making it happen every single day for 20, 30 plus years was enough motivation for me to pursue what I wanted to do. To me, it was just no excuses. They came with a lot less than I do… They made a lot of sacrifices. So, for me the pressure of that sacrifice weighed heavy on my shoulder. It forced my hand to make it count.”

What would follow is an over a decade-long career of capitalizing on the opportunity to sharpen his skills and seize every moment that presented itself, starting with the chance to sit in on his older sister’s graphic design college courses at the age of 9. It was one of the first times that Peniche would profit from being an eager fly on the wall. Naturally, it wouldn’t be the last.

His skill as an astute observer would transfer over into his first big break, connecting him to Ben Baller. It was while following his movements via the infamous Nike Talk Forum (an early 2000s-era precedent for lavish Instagram feeds) that Peniche caught Baller’s request for someone proficient enough in coding to create a photo gallery for his MySpace page.

Having versed himself in the early art of customization on the social platform, Peniche grabbed the opportunity.

“We were able to establish a relationship from there on,” he recalls. “I was just trying to see how I could fit into the equation. How I could be an asset. That’s ultimately what everything is about. How can you be an asset to something that’s already in motion?”

The relationship would eventually lead to fruitful introductions to the likes of The Game, DJ Skee, Estevan Oriol, Mister Cartoon, and Joel Madden of Good Charlotte.

“Those introductions — I didn’t know how they would blossom, but they did blossom in their own capacity,” says Jorge.

From then on, he was able to demonstrate his value with opportunities that included interning with DJ Skee and creating promotional material for Los Angeles’ Envy Expo to picking up the camera to document the process of creating The Game’s sophomore and junior albums.

“First impression is everything, especially in an industry that everybody wants to be in,” Jorge advises. “You have to have the skillset and you have to be enthusiastic… Be ready and willing to work.”

Such work ethic eventually led him to his career-defining run alongside the late Nipsey Hussle. It was a friend who put Jorge’s ear onto Nip’s early Bullets Ain’t Got No Name, Vol. 1 project.

“The music had as much of a nostalgic feel to it that we love on the west coast but also an updated take on what was going on in the streets. It felt authentic.”

He continued to follow Nipsey’s career through the release of Volume 2 before taking the initiative to reach out himself and offer to take a few editorial shots for a potential piece in Rhyme Magazine.

Once again, the impetus behind Peniche’s initiative was the value he believed that he could bring to Nipsey Hussle’s brand. After identifying the fact that the then-budding rapper was in need of a visual brand that told his story, he placed himself front and center for the job.

The initial encounter would find Peniche in the background for the triumphant rise of the Crenshaw hero as recalls Nipsey’s decision to leave Epic Records in 2010 and launch his All Money In label. It was there that the rebrand Peniche dubs as “The Marathon Era” began.

“I believed in what he believed in,” he notes of the relationship the two men shared.

It was a relationship that offered plenty of learning lessons that Peniche keeps tucked to this day. One of which involved his recollection of the value in developing a niche before chasing unlimited riches. It was a strategy that Hussle himself employed well and one that Peniche got to analyze first hand while managing his tour runs and pop-up shops across the country.

It has since developed into a creed of trusting the process and never skipping steps. It’s safe to say that the creed has paid off as Peniche’s signature photography has ranged from local barber shop billboards featuring Nas all the way to the subjects of the CNN Heroes initiative as his platform only continues to grow.

“Lead with authenticity,” he declares. “Authenticity will paint the picture that you want it to paint.”