In a new episode of “No Sleeping in the Trophy Room,” the private jet broker breaks down his blueprint for building his brand. 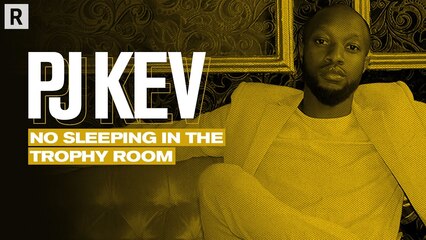 For Kelvin Mensah, the road to riches has been well-paved. Armed with an insatiable hunger to know more and to grow more at the outset, the Ghanaian-American entrepreneur’s current successes were nearly guaranteed. In a new sit-down with Los Antonio on “No Sleeping in the Trophy Room,” the private jet broker best known as PJ Kev breaks down the blueprint that saw him through building a brand from the ground up, and becoming a rare and trusted voice in the luxury travel space.

Growing up in The Bronx’s River Park Towers, Kev cites his earliest aspirations as being no different from the next kid, hinging onto “hoop dreams” to help him climb toward the top. He even tried his hand at music, having a hand in DJ Webstar and Ron Browz’s “5000” track as a part of the Swag Kids crew of the earlier 2000s. It didn’t take long for Kev to pivot, however, into a greater love for business, citing leaders such as Diddy and JAY-Z as apt role models.

”I would go find new things just to sell,” Kev recalls of the hustler’s spirit that he adopted early on.

He soon took his affinity for business and commerce, and translated it into an early gig with a private jet company in Long Island. While the job was short-lived, Kev reveals that he walked away with much more valuable tenets that would set the foundation for his passion and career. He used the time to absorb as much as he could and learn diligently — qualities he credits for his success.

As he found himself settling into the private jet industry, the businessman’s defining moment didn’t arrive until he was tasked with brokering a private jet flight for Brazilian soccer star Neymar Jr. It was the moment that the athlete posted Kev and his company to his 100 million followers that the broker decidedly became PJ Kev, birthing a brand and one of the most recognizable names in his industry.

”If somebody at that caliber and that level can see my worth, and the work that I’m doing in the private jet industry,” Kev says, “it’s time for me to take that… at that moment, I changed my name. I made it in a way where every time you see a jet, you’ll think about PJ Kev. I believed in myself. Once you believe in yourself enough, people will start believing in you.”

Naturally, such feats don’t come without obstacles. For the now 28-year-old, being a young minority in the luxury space has proven to be his biggest one of all. However, he reverts back to the earliest tenets that birthed his career as a means of victory.

”Being young in an industry where there are not so many minorities, you have to overcome the obstacle of ‘do you really know what you’re doing?’” he asks.

He goes on to stress the importance of research and being well-versed in your craft. In addition to that, Kev identifies trust-building as a key tool especially when dealing in the space of high-value transactions, all while adhering to a succinct and powerful motto: “Patience, passion, determination.”

”The consistency of doing it over and over again, and building a great reputation, and a great name for myself, the work speaks for itself,” Kev adds.

Even so, he has no plans of slowing down. As he continues to dominate the private jet sector, Kev is also looking toward entering the mega yacht industry. Once more, he cites the importance of representing a virtually non-existent population in such spaces.

”It’s time for us to step up in an industry where a lot of people are not really present,” Kev declares. “Being a young entrepreneur in my lane, I want to showcase that.”

His plans for expansion go beyond his own scope of work, as well. Most recently wrapping up a vacation in Ghana, Kev also envisions a future where more young entrepreneurs like himself can tap into their roots and build an ecosystem that reaches back and pulls others forward. He’s already set his plan in motion by launching a foundation that has provided clean and potable water to different villages for 10 years, while also supporting and funding young artists and creatives in their endeavors.

”That’s what legacy is about,” he reminds us. “Success is about how many people’s lives that you can change and impact.”