×
find us on /
The Valentino Vlog

If you’re not watching Guap’s “The Valentino Vlog,” you trippin’. Peep five top moments you missed out on from the first episode here. 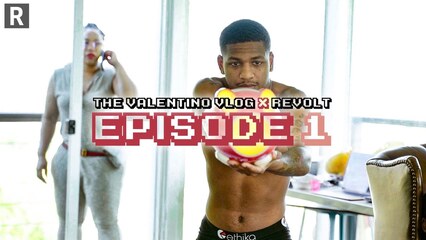 S1 E1 | A Day in the Life of The Ferragamo Falcon

Guapdad 4000’s series on REVOLT called “The Valentino Vlog” gives watchers a glimpse into the exciting life of the Ferragamo Falcon. Check out the highlights of each episode, and be sure to tune in next time.

REVOLT TV has a new show called “The Valentino Vlog” starring rapper Guapdad 4000. Created by Paul Middleton, the series follows Guap throughout his day-to-day activities, offering a closer look into his funny and energetic lifestyle.

On the first episode, the rising rapper shows the world his home AKA the “Scam House,” the studio he records out of — TWNSHP studios — and even some of his tour life. With hilarious moments and knowledgeable gems tucked into pockets all throughout the 11-minute video, “The Valentino Vlog” is the perfect way to kick off your Friday.

While Guap has been creating content for quite some time, his first episode with REVOLT shows him in his natural form. Whether in the studio, at home or the gym, Guap’s dynamic personality stays the same.

Watch “The Valentino Vlog” above and check out the top five best moments of episode one below!

The episode kicks off by taking us back to February 2020. While in the studio, Guap’s manager Sam calls the guys out for being out of shape. As performing is an active sport, so to say, it’s time for the guys to get in together in Sam’s eyes. As a motivating factor, the whole crew bet money on the challenge — side bets included. “I wanna figure out some way to get some money out of Guap and Pinch somehow,” Sam joked and the next day the challenge began. “Working out is like paying the rent. I don’t ever want to do it, but I do it anyway,” Guap said unenthused. However, just hours later, the rapper hits the gym and the rest is history. Even a lit night with Smino couldn’t stop him from getting his workout in. Hangover and all.

Guapdad hit TWNSHP studios with P-Lo to work on some new music. “For one, it took me like seven years to get a session with P-Lo,” the artist shares. “And every session has been hornier and hornier.” As you see, he and P-Lo share unique chemistry in the studio. P-Lo states all the rappers are going the emo route. Agreeing to the statement, Guap coins himself as the horniest rapper out. However, there are two meanings to the horniness. In one moment, it’s sexual. The next, it’s ambition. Claiming horniness is the reason they’re all there, the guys use it as energy to fuel more money, more music and more girls. To them, the theory of intellectual horniness can change the world.

In the same studio session, Guap’s eagerness prompts him to dig into his contact list. On what seemed to be a great day in the studio, both Jeremih and Eric Bellinger picked up his call. With the guys on a high note, they all agreed this was the recipe for a popping track. “Everybody’s answering the phone. So, let’s do it,” Guap excitedly says. The squad even hit up Roddy Ricch for a feature. In just one session, the team managed to pull a record out of thin air.

Another moment worth mentioning is the family roasting session featuring the star’s little sister Chai. Back at the Scam House, both of them go back and forth with punchlines that display their sibling love. Chai for sure won the battle of words mentioning his beard that doesn’t connect. “In the arms of an angel, his beard will connect,” Chai sings, ending with a big laugh. A clearly sensitive subject, Guap’s over it as his baby sister takes the W.

In the final moment of the episode, Guap’s at Grammy award-winning producer Illmind’s studio cooking up new music. The scene offers a look into his recording process and the ways that he creates a flow on the beat. Satisfied with the song, the guys began talking about placements and here comes Sam with the good news. Guap’s hit song from 2018 “Bitch I’m On’’ was featured in fellow rapper Lil Dicky’s new FX show “Dave.” Much to his surprise, Guap shows love to Lil Dicky by thinking back to one of their conversations. “That’s funny it’s ‘Bitch I’m On’ because that’s what he said was his favorite song is by me,” Guap shares. “That’s how he found out I was a rapper.” Happy and grateful, he let out a big wow. “Keep it in the family. My friend gave me my first TV sync,” he added. With a movie and TV placement in February, Guap is clearly fired up to keep going and growing.

Check out new episodes of Guapdad 4000’s “The Valentino Vlog” every Friday at 1 p.m. ET/10 a.m. on REVOLT.tv and REVOLT’s YouTube.