Boston Celtics player Jaylen Brown opens up about NBA hiatus, staying active amid Coronavirus and more on ‘‘No Sleeping In The Trophy Room’’

“I’m not going to let Coronavirus put everything on hold,” the 23-year-old said. Check out our recap of the conversation here. 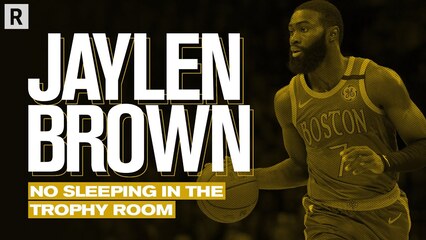 Boston Celtics player Jaylen Brown is using his platform to speak out on urgent matters in today’s society. The 23-year-old baller, who signed a four-year extension contract with the team, has had an amazing career thus far. Back in 2016, the California native ranked as the number three draft pick, according to Bleacher Report. After an outstanding season, player Marcus Smart gushed about Brown’s improvement while on the team. “[Brown is] athletic enough to guard a lot of guys. So, once he understands that and he takes that head-on, he’ll be a better all-around player. And he’s been doing a pretty good job so far,” he said at the time.

In addition to his shooting guard position, Brown also serves as Vice President of the Player’s Association of the NBA, which is a role that allows the No. 7 baller to voice his ideas and practice leadership.

During a conversation on a special edition of “No Sleeping In The Trophy Room,” a new series by REVOLT that officially premieres on Monday, April 6; the 6-foot 7-inch player opened up about guiding his teammates amid the Coronavirus pandemic that resulted in the NBA hiatus.

“I’m young. I’m 23 [years old]. With this outbreak and state of emergency, you have to do a lot of learning on the fly,” he said of his role as VP role.

Although many are concerned about the current state of the country and the recommended precautionary measures, Brown confessed that it’s important to stay focused. He explained that he has a detailed routine that keeps him stress-free.

“You gotta have a routine. I think that’s the most important thing,” Brown said to show host Los Antonio. “Especially now, with the resources and the essence that we normally have, it’s there. There’s so much power in having a routine. I think a lot of young people can implement that into their daily structure and they will see a big difference. For me, two days ago, I wrote out a list of things that I wanted to get done and how I’m going to go about doing it. So, I have everything scheduled out.”

He continued: “I got a lot of stuff in my life that I’m still striving for and I’m not going to let Coronavirus put everything on hold. I’m going to continue to work, but you have to have the mindset before the vision.”

In addition to his routine, Brown shared that music has become an escape for him. He pointed out that he enjoys listening to Jay Electronica’s debut album, A Written Testimony, which dropped on March 13. “Music is number one,” he said. “Right now, I’m bumping the new Jay Electronica album. I also have a stationary bike that is also essential.”

This isn’t the first time that Brown has spoken out about the severity of Coronavirus. Earlier this month, he hopped on Instagram Live to provide fans with helpful tips on ways to prevent contracting it. “This is not a joke. This is not a mass conspiracy. Within two weeks, maybe a month, we could see its real size and it could be difficult… Always wash your hands, limit contacts, stay at home as much as possible,” he said to his Instagram followers.

Be sure to check out the official debut of “No Sleeping In The Trophy Room” on Monday, April 6 at 12:00 p.m. ET/9 a.m. PT on REVOLT’s YouTube and REVOLT.tv; and new episodes every Monday afterward.