One Virginia cop donated to Rittenhouse and said, “You’ve done nothing wrong.”

Police officers and political officials donated to Kyle Rittenhouse’s legal fund, The Guardian reports. The information was shared during a data breach of GiveSendGo, a Christian crowdfunding website, where Rittenhouse raised $586,940 last year.

Among the donations, which appeared anonymous prior to the breach, were notes of encouragement for Rittenhouse, who fatally shot two people and injured a third during an anti-police brutality protest in Kenosha, Wisconsin.

The Guardian reports that one police officer in Norfolk, Virginia — Sgt. William Kelly — wrote to Rittenhouse: “God bless. Thank you for your courage. Keep your head up. You’ve done nothing wrong.”

“Every rank and file police officer supports you,” the donation comment continued. “Don’t be discouraged by actions of the political class of law enforcement leadership.”

More contributions came from Craig Shepherd, a paramedic in Utah; Keith Silvers, a Huntsville city employee in Alabama; and Michael Crosley, an engineer at the Lawrence Livermore National Laboratory. The director of public affairs at the laboratory, Lynda Seaver, wrote in an email that Crosley made “an honest mistake” and “never intended to use his Lab email on this matter.” 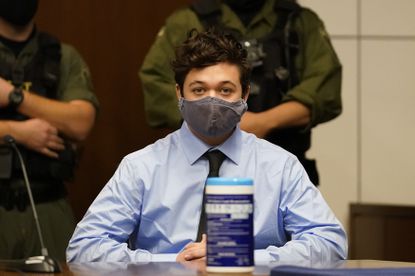 Another person whose donations data was released in the breach was Kenosha police officer Rusten Sheskey, who returned to active duty this week after shooting Jacob Blake last summer.