Teacher reassigned after saying she has a right to “dislike Blacks”

Tracey Brown will be assigned to a position in which she does not interact with children.

Tracey Brown, the Florida teacher who is under investigation for making racially charged comments, has been reassigned.

As the Osceola School District continues to look into her statements, the Poinciana High School social studies teacher will be working in a position where she will not interact with children.

Brown is being investigated after she was captured on video saying she “has much right as anybody else to dislike Blacks.”

The comment came amid a heated conversation with her students on Oct. 12. While teaching a virtual class, Brown expressed her issue with the Black Lives Matter movement.

“You’re implying that Black lives are more important than anyone else, and I have a problem with that,” Brown told one student, before recounting a time where she was attacked by people during a train ride in Atlanta.

“I was 16 years old, and I was attacked on a MARTA train by a gang. And yes, [a] gang — wearing bandanas, gang sings, language — of Blacks. In Metro Atlanta.”

“I have as much right as anybody else to dislike Blacks for what happened to me,” she continued. “So, you don’t get to sit there and preach to me what I do and don’t know.” 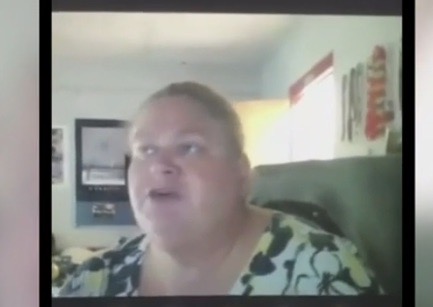 A petition has since been started, calling for disciplinary action against Brown.

“The population of black and nonblack POC [at Poinciana High School] is way higher than the average school in the United States, creating a safe space for students to learn and discuss their beliefs without being ridiculed or discriminated against,” the petition reads. “Why is it that the Osceola County School District allow[s] a teacher who talks down to students about issues that directly relate to them, such as the Black Lives Matter movement, to continue to work for them? The student body of PHS does not support this injustice. Ignorance has no place in education, especially in today’s social climate.”

More than 4,000 people have signed the petition.